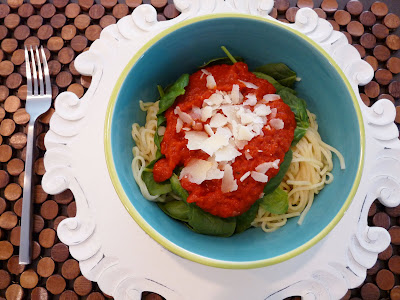 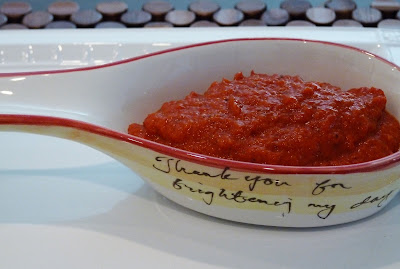 I'm obsessed/infatuated/over-the-moon in love, with the 'sweet pointed red peppers' I get at Costco.  They are absolutely delicious and without question the best peppers I've ever had.  I love grilling them on the BBQ (good and charred) and eating them along side whatever we happen to cook that night.
Tonight, I'm roasting them in the oven, along with onions and garlic (an entire head of garlic - Mmm) for a pasta sauce, which will no doubt accompany a huge bowl of noodles.  The standby jarred tomato sauce officially has the night off, and instead this homemade variety is taking it's place.  Throw in some sun-dried tomatoes, spinach, a little parmesan cheese and some garlic bread.  Dinner is served.

Preheat oven to 350F.
Place peppers, onion and garlic cloves into a 9' x 13' baking pan.  Drizzle with olive oil, season with salt and pepper and toss well.
Roast for 45 minutes, until soft and caramelized.
Using an immersion blender or food processor, blend roasted vegetables and sun-dried tomatoes adding stock to help thin it out.  Add basil, salt and pepper to taste.
Prior to serving, reheat sauce in large pot.
Divide cooked pasta among 4 bowls, top each with 1/2 cup of spinach and top with sauce.  Sprinkle with parmesan cheese.  Serve with some buttery garlic toast.  Enjoy! 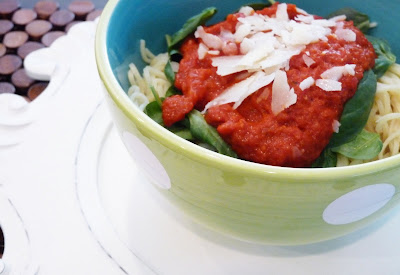 Note: This sauce would pretty much go with anything, it would be delicious on gnocchi, chicken or fish.  Yay for peppers!