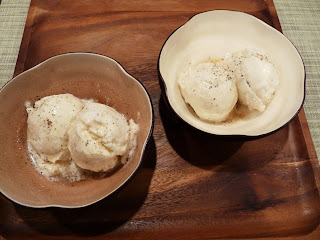 I always end dinner with something sweet.  Yogurt and berries or a piece of chocolate, are my go-to staples.  Tonight, I decided to throw caution to the wind, and went for indulgence.  A boozy, ice cream kind of indulgence.  Vanilla ice cream is the perfect canvas for all types of liquor.  Beer (float), port, baileys, and even scotch.  In fact, come to think about it, is there anything ice cream doesn't go with?  Nope.  Plain and simple, it goes with everything.

This dessert was inspired by my Sunday TV staple, 'The Good Wife.'  Last nights episode saw it's fair share of scotch drinking @ the office.  After all, Lockhart Gardner is a law firm, which means it's a prerequisite to have a stocked liquor cabinet, right?  I think in LG's case, it may even replace the office water cooler.  Pass the scotch please.  In the final scene, we see Alicia break off her romantic relationship with Will.  Naturally, after being dumped, Will finds comfort in a stiff drink.  Funny, if it was the other way around, I'm certain we would have seen Alicia turning to a pint of Ben & Jerry's.  Who's to say which approach is more effective at healing matters of the heart.  Instead of picking sides, lets combine the two, sprinkle in some pepper and grab a spoon.  Dessert is served!