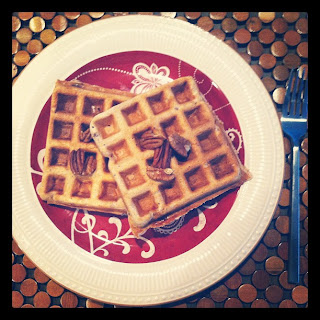 Happy Friday!  Friday's need no help in being more awesome, but do you know what makes them even better?  Waffles @ 9am.  Knowing that waffles were going to be on the menu this morning, my only task was to narrow down the potential combination.  Cinnamon Pecan, sounded like the perfect way to start my day.  Pecans are my favourite nut (well behind macadamia) and cinnamon is my favourite spice.  Mix both of those in with some waffle batter, top with syrup, and you've officially put a smile on my face!