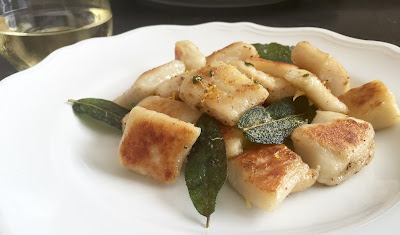 i love gnocchi, like love-love.
fluffy pillows of yum, bathed in a sea of endless sauce options.
can you really go wrong?
#notachance

and the only thing better than gnocchi, is pan-seared gnocchi.
#fact
the first time i had it was girls night, circa 2011, at rush.
and it was amazing. #mindblown

so because yesterday was the beginning of the weekend, my birthday week is coming to a close, and the weather outside was dreary and rainy, i alloted my time accordingly, and spent it in the kitchen.
also, i knew this was going to score major points with mr. handsome. like m-a-j-o-r points.

brown butter, crispy fried sage, a little lemon zest all tossed with pan-seared homemade gnocchi, this is what a win looks like. 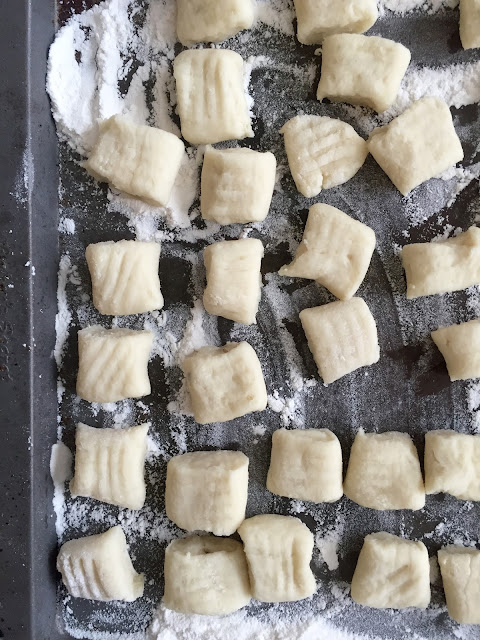 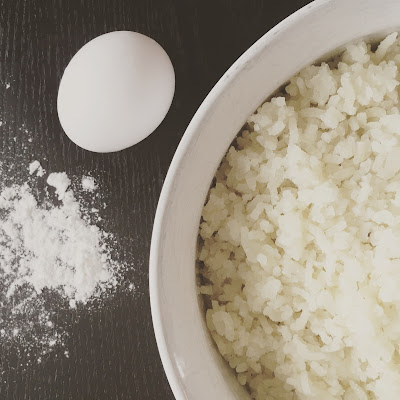 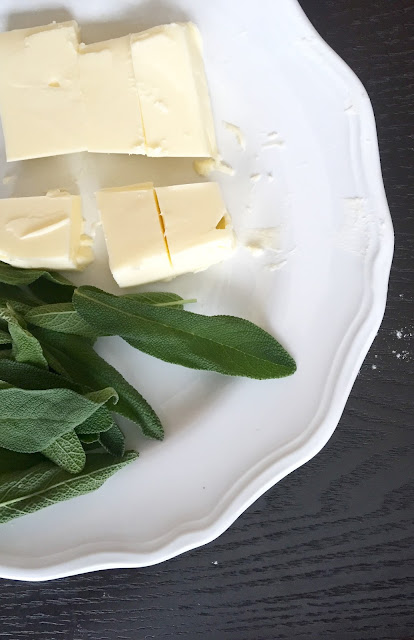 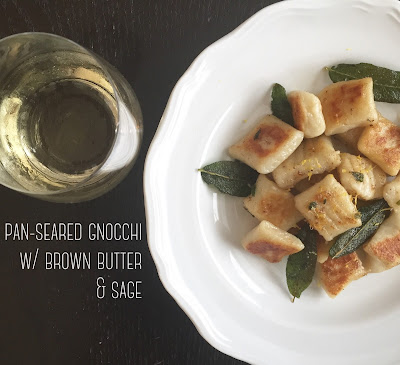 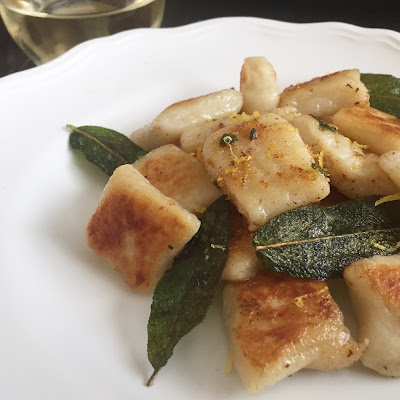 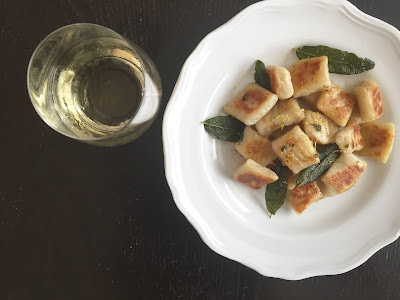 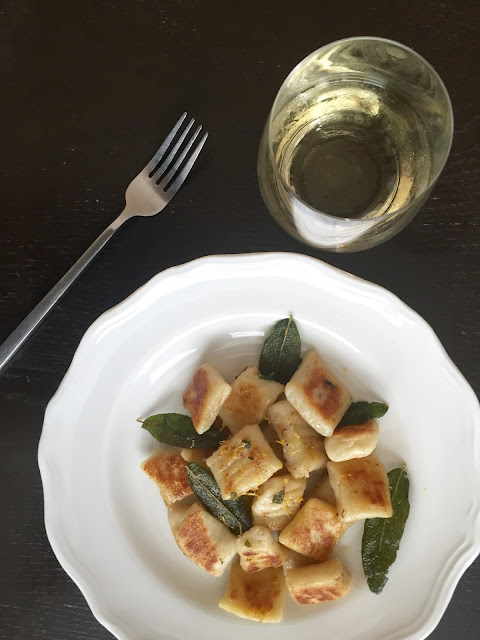 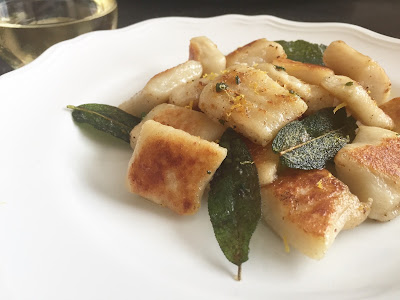 to cook the gnocchi
bring a large pot of well-salted water to a boil over high heat.  add about one-third of the gnocchi, taking care not to clump them together as you drop them in.  give one gentle stir, wait until the gnocchi all float to the surface of the water and then cook them for one minute.

meanwhile, heat 1 tablespoon of the butter in a 12-inch nonstick skillet over medium-high heat.  when the butter is completely melted, use a large slotted spoon or a strainer to transfer the cooked gnocchi from the boiling water to the skillet, shaking off as much water as possible first.  the gnocchi should form a single layer in the skillet.  sprinkle with 1/4 teaspoon salt and cook, shaking the pan occasionally to turn the gnocchi, until they are lightly browned, about 2 minutes.
transfer to a large plate.  repeat with remaining gnocchi.

to make the sauce:
wipe the skillet clean.  place back over medium-high heat and add the butter.  once the butter has almost completely melted, stir in the sage leaves.  cook, stirring occasionally, until the butter turns a light brown color (do not let it burn) and the sage leaves darken and crisp up slightly, 2 to 3 minutes.  remove from heat.
add the reserved gnocchi and the lemon zest to the pan and toss to coat well.  season to taste with salt and pepper.  serve immediately. 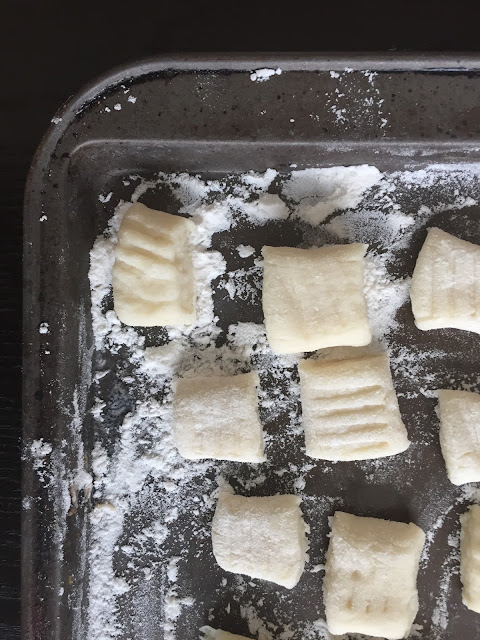 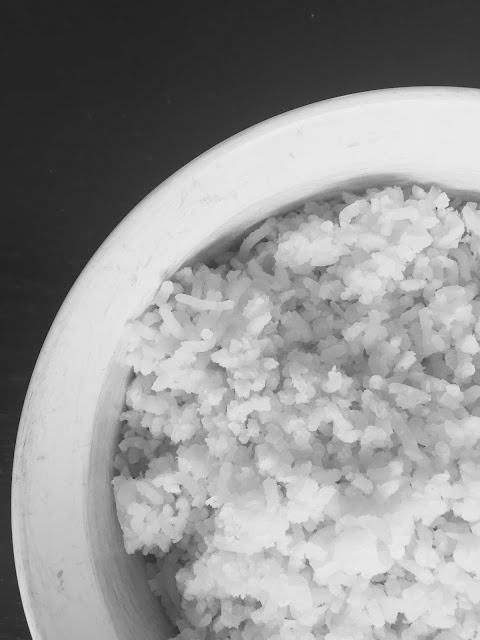 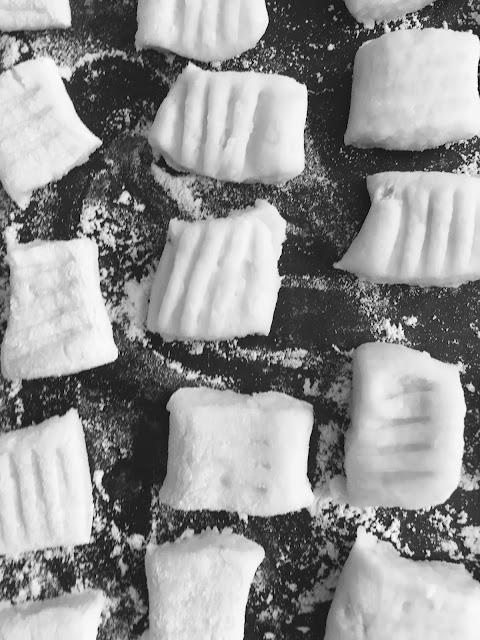 method:
put the unpeeled potatoes in a large pot.  fill the pot with enough cold water to cover the potatoes by at least 2 inches and bring to a simmer over medium-high heat.  reduce the heat to medium, partially cover the pot, and simmer the potatoes until  they are completely tender and easily pierced with a skewer, 30 to 35 minutes.
drain the potatoes, let them cool just enough that you can handle them, and then peel them.  cut them in half crosswise and pass them through a ricer into a large bowl.  let cool until almost at room temperature, at least 20 minutes.
lightly flour a work surface.  in a small bowl, mix the flour with the salt.  add the egg to the potatoes and then add the flour mixture.  mix with your hands until the flour is moistened and the dough starts to clump together; the dough will still be a bit crumbly at this point.  gather the dough together and press it against the bottom of the bowl until you have a uniform mass.  transfer to a floured work surface.
knead gently until the flour is fully incorporated and the dough is soft, smooth, and a little sticky, 30 seconds to 1 minute (careful not to overmix.)
move the dough to one side, making sure the surface underneath is well floured.  cover it with a clean kitchen towel.
sprinkle flour on two large rimmed baking sheets.  place aside.
remove any lingering bits of dough from your work surface and lightly reflour the surface.  tear off a piece of dough about the size of a large lemon and put the towel back on the rest of the dough so it doesn't dry out.
with the palms of both hands, roll the dough into a rope about 3/4 inch in diameter.
with a sharp knife, cut the rope crosswise ever 3/4 inch to make roughly 3/4-inch-square gnocchi.  arrange the gnocchi in a single layer on the baking sheets, making sure they don't touch.  repeat until you run out of dough, reflowing the work surface as needed.  once all the gnocchi have been cut and spread out on the baking sheets, sprinkle them with a little more flour.